Darden Business and Public Policy Club President Ivana Brancaccio and Graduate Women In Business President Natalia Alvarez Diaz (both Class of 2022) worked together to plan and execute “Elect Her,” a non-partisan workshop to help empower and train graduate women at the University of Virginia on how to run for student government and political office.

On a bright and sunny spring day at Darden, a group of 27 graduate women from schools including Darden, the Batten School of Leadership and Public Policy, and the School of Law gathered for an interactive training moderated by UVA alumna Susannah Wellford from Running Start, a nonpartisan nonprofit that provides young women with hands-on training to develop the confidence, connections and capabilities to run for public office.

“What better way to celebrate the end of women’s history month than by gathering with a group of driven and talented women here at UVA,” exclaimed Ms. Wellford.

Brancaccio and Alvarez Diaz had both lived and worked in Washington, D.C., prior to pursuing their MBAs and saw the value in staying involved and active in the community. Upon arriving at Darden, both students bonded over identifying opportunities to support and develop women leaders in business school and beyond.

Brancaccio, who is a Greer fellow through the Maxine Platzer Lynn Women’s Center at UVA, contributes to research being conducted by the Center’s director in support of the Center’s diversity, equity, and inclusion efforts, pitched the event to Alvarez Diaz, who whole-heartedly embraced the idea. While to many, hosting a workshop aimed at encouraging women to run for office seemed out of scope for a traditional business school, Alvarez Diaz saw the value in introducing women to leadership roles outside of the boardroom.

“While women make up more than 50 percent of the student club presidents at Darden, and a majority of the vice presidents roles too, we don’t spend a lot of time talking about how we can take the lessons we learn here and use them to serve our communities beyond Darden,” added Alvarez Diaz.

For several months, both worked to secure funding and identify speakers to participate in the event. Both were thrilled when U.S. Senators Jacky Rosen of Nevada and Shelley Moore Capito of West Virginia agreed to participate in the workshop. Rosen answered questions about how she pivoted from her career as a former computer programmer to a Congresswoman, and eventually U.S. Senator.

“My former boss, Senator Rosen, was a political outsider before she ran and won her congressional seat in 2016,” said Brancaccio. “What I learned from her story is that your career is not linear, and that leadership can happen at many levels, not just in the boardroom, but in your neighborhood council, city hall, school district, and yes, even in the halls of Congress.”

Senator Capito addressed the audience and shared her vision for gender parity and equal representation in Congress. “Women are running for office at unprecedented rates and women now represent 27 percent of seats in Congress. While we’ve made tremendous progress, we can’t forget that we make up half the population. We cannot stop until we reach gender parity in Congress and at every level of government,” said Capito, a UVA School of Education alumna.

Participants spent the day networking and working on identifying the issues they are most passionate about. Executive Vice President of the Darden Student Association (DSA), Jennifer Bundy (Class of 2022), answered questions from the audience about her experience running and serving for DSA student government and in her previous role serving in the Advisory Neighborhood Commission in Washington, D.C. After hearing how to build a campaign platform and network, participants crafted a formal elevator pitch and competed for the best candidate pitch of the day.

After reflecting on the event, both shared that the most inspiring part of the event was not only hearing students deliver their campaign speech but seeing how supportive the women were of one another through smiles and encouraging comments.

The event was held as part of the University of Virginia events for Women’s History Month. Sponsors for the Elect Her workshop also included the Darden Adam Smith Society, the Batten School of Leadership and Public Policy, the UVA School of Law, and the University’s Maxine Platzer Lynn Women’s Center. Maggie Dodson
‘It Will Be One of the Most Rewarding Things You Ever Do,’ From First Year Ines de Estrada 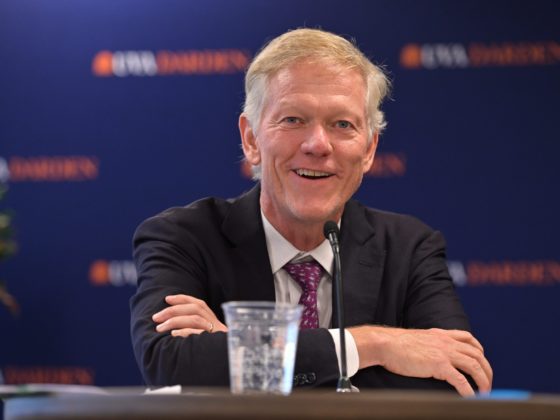