Yes Business Can Save the Earth: Highlights from the VERGE 17 Conference

Yes Business Can Save the Earth: Highlights from the VERGE 17 Conference

Calls for significant cuts to EPA and DOE budgets, fuel efficiency standards being reopened, pulling out of the Paris agreement – the Trump administration appears committed to unraveling all of the progress to accelerate clean energy and innovation. But the good news is that the most unlikely of friends will keep us moving toward decarbonization: private corporations. While the Federal government seems forbidden to even utter the words “climate change”, companies like Apple, Google, Facebook, Microsoft and others are embracing them and taking steps to reduce greenhouse gas emissions in their operations and supply chains. But our work is definitely cut out for us and that’s why in addition to these corporations, academics, non-profits, and policymakers need to work together to identify solutions that make economic sense and are sustainable longer term.

Last week I attended GreenBiz’s VERGE 17 Conference, Where Technology and Sustainability Meet. Hundreds of people gathered in Santa Clara, CA to talk about the intersection of IT and clean energy. Strategically located within Silicon Valley, the conference was a nice mix of technology incumbents and start-ups, utilities, automakers, policymakers, solar and wind manufacturers, investment and venture capital firms, and non-profit advocacy groups. The consensus? There is major disruption happening across all sectors, especially the energy sector. As one panelist said, “We are on the forefront of a paradigm shift”. GreenBiz livestreamed the event and will make some of the presentations available but here is a sneak peek into the good news and the not so good, or at least the challenges ahead, shared by some of the panelists (photos provided by GreenBiz):

One other thing I realized while attending VERGE – it’s no wonder so many people live in California. The weather is beautiful, the vibe cool, and people REALLY do care about the environment. That and fuel cell vehicles are super cool to drive.

But back to the conference. Overall, leaving Santa Clara I felt energized and encouraged about where we are heading, despite the grim news coming out of Washington. There is a collective call for decarbonization across many sectors if we hope to meet our climate goals. But what will it take to decarbonize an industry and where should we start to have the biggest impact? According to the U.S. EPA’s Greenhouse Gas Emissions website, the three biggest sources of greenhouse gas emissions are electricity generation, transportation, and industry. Together, these three sectors represented more than 75% of total U.S. emissions in 2015.

Over the next year, we will release a series of reports as part of the Business Innovation & Climate Change initiative that evaluates the potential for decarbonization in these three sectors. The first report titled Path to 2060: The Decarbonization of the Automobile Industry will be released this fall along with a podcast discussion with UVA Darden’s Professor Mike Lenox. Make sure to check out both on our Research page.

Professor Lenox’s upcoming book asks the question “Can Business Save the Earth”.  I think it can, and it must!  And after attending VERGE 17, I find myself encouraged that this is already happening. 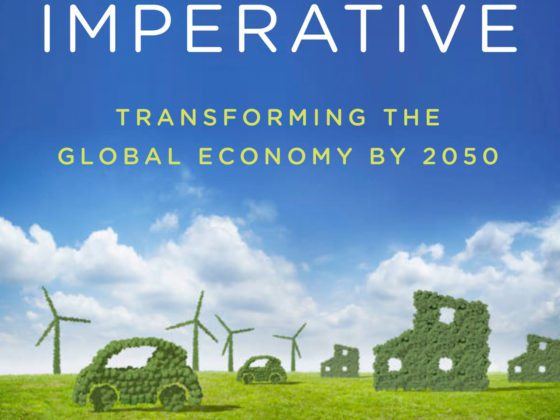 Rebecca Duff
Reimagining How We Power the World: One Delegate’s Thoughts on Darden’s Jefferson Innovation Summit 2018